The Toyota Land Cruiser first hit the market in 1951 and holds the distinction of being the longest-running Toyota vehicle. Ten years prior to its release, the Imperial Japanese Army occupying the Philippines had found an abandoned American Willys MB army reconnaissance jeep and sent it home to Toyota. The military tasked the auto manufacturer to produce something similar but to alter a few things, mainly the appearance. However, the goal was to reverse-engineer a utility vehicle with similar capabilities as the Willys.

In 1954, after some modifications, the new car was named the ‘Land Cruiser,’ as a dignified competitor to the English-made Land Rover. At the time, the SUV shared the name with the American-made Studebaker Land Cruiser.

Today, more than 10 million units have been sold, making the Land Cruiser one of the most iconic SUVs of all time.

Given its long history, every model has been slightly better and more improved than the last. The latest versions have all the modern bells and whistles, making them superior to the previous generations. Here are the most notable Land Cruiser pros:

The Toyota Land Cruiser has an issue with its automatic gearbox, which affects the selectors, especially when switched to manual mode. This issue makes changing gears extremely challenging. This is exacerbated by the fact that the gears are quite complex.

Below you will find the average Manufacturer’s Suggested Retail Price (MSRP) of the Toyota Landcruiser when new. 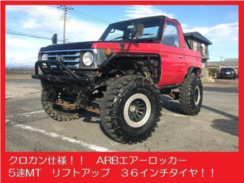 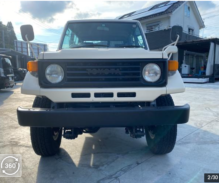 Due to the fact that the Land Cruiser has been around since the 1950s, we’ve created a list of how it evolved over the years.

The BJ and FJ Models were designed for the US military by Toyota. This design took after the British Land Rover Series 1.

The BJ series was manufactured in the following three variants:

Around this time, the term ‘Land Cruiser’ was first used to describe the vehicle. After dropping the ‘Jeep’ name. The BJ-J model, which sported the fire engine chassis, was the first Land Cruiser to have a 3.9L Type-F gasoline engine that boasted 123 horsepower. The Toyota FJ-J model was also introduced with the cowl chassis for use as a fire engine.

In 1955, the second-generation Land Cruisers were rolled out. Ranging from J20 to J30, they were designed to appeal more to civilians, not the military. Compared to the first generation, the engine had been moved forward by 4 inches, to provide a more comfortable ride. The seats were also made as comfy as possible and the softer suspension made the ride smoother compared to its predecessors.

The result was a light truck with a 3.9L Type -F gasoline engine that produced 133 horsepower accompanied by a three-speed transmission. In 1958, the FJ25 model was unveiled in Brazil as the Toyota Bandeirante, making it the very first Toyota built away from Japan.

The J40 series was first introduced in 1960. They were built as two-door models, with both Gas and diesel engines available. In 1960, the FJ45-B was rolled out, featuring a longer wheelbase than its predecessor. The FJ40 series were released in different variants including pickups, station wagons, and utility vehicles.

This model is usually referred to as the ‘Toyota Land Cruiser 55.’ The FJ50 was considered to be the first serious, comfort-oriented station wagon in the entire Land Cruiser line. Starting with the FJ55 in 1967, the vehicle had four doors and the drivetrain was borrowed from the FJ40. From 1975, the Type-F engine was replaced with the larger Type-2F engine. Production ended in July 1980.

This series, also known as the Land Cruiser 60s, had the capacity to seat up to 8 people. It was a four-door wagon with exceptional off-road capabilities. Even though the truck inherited the rugged appearance from its predecessors, it had been revamped to compete with the formidable rivals in the SUV market. Creature comforts like an upgraded interior, air conditioning, and a heating system helped it appeal to the family-oriented consumer. In Venezuela, it was dubbed ‘The Toyota Samurai.’

The FJ60 came with a six-cylinder Type-2F gas engine. In addition, a 3.4L four-cylinder diesel engine was added to the Land Cruiser’s lineup. By 1988, the gas engine had been upgraded to a 4.0L Type-3F-E EFI engine. Moreover, the FJ62 VX series started gaining popularity as a passenger vehicle in Japan.

The current iteration of the Land Cruiser traces its roots to the 1984 J70. The SUV boasts an excellent ride quality that rivals its predecessors. The J70’s series has a 4.0L Type-3F gasoline engine. Smaller, lighter-duty Land Cruisers come with 2.4L gas engines. The J70 has also created a couple of spinoffs: the J80, which was nicknamed ‘the Bubble’ in Columbia, and the J90 Prado, which is a very successful SUV in its own right. The Prado was the first Toyota to combine four-wheel drive with an automatic transmission.

In October 1989, the Land Cruiser J80 model was unveiled at the Tokyo Motor Show. The SUV featured back doors that swing out, making it a well-rounded vehicle. The Land cruiser came in two variants – an entry-level model and the VX model, which was fully equipped. In 1994, the swing-out back door was replaced with a hatch and tailgate. The J80 came with either a type 3FE gasoline engine or a direct-injection turbo-diesel. In addition, four-wheel drive and anti-lock brakes were offered as standard.

Toyota introduced the J100 series as a replacement for the J80 after the latter had been running for eight years. This series was introduced in two variants – the J100 and J105. The 105 series were sold to Australian, African, South American, and Russian markets. The 100’s came with both diesel and gasoline engines. The new rack-and-pinion steering helped improve handling, although it somewhat compromised off-road capability.

With this series, the Land Cruiser started offering a V8 engine for the first time. The 100’s were produced until 2007, being called various names such as the Amazon (in the UK) and leading to spinoffs like the Toyota Cygnus. There was a slew of facelifts from 2000 to 2007, with small tweaks here and there.

In early 2007, work on the modern iteration of the Toyota Land Cruiser was completed, culminating in the release of the J200. Sales started in Venezuela in September.

The J200 had the following improvements from earlier models:

How much does a Toyota Land cruiser cost?

How many miles can a Toyota Land Cruiser last?

The Toyota Landcruiser is among Toyota’s indestructible cars. If you maintain it properly, it will last for around 20 years or approximately 300,000-350,000 miles before you’ll need to replace mechanical components.

The J100, 1998-2007. The Toyota Cruiser J100 combines rigidity and durability from its predecessors with modern-day technology. It is arguably the best-looking Land Cruiser ever made.

Which are the major things to look out for when buying a used Toyota Land Cruiser?

Toyota Land Cruisers rarely develop mechanical issues. So apart from rust, there’s nothing else that should trouble you when inspecting one when you want to buy it. But just to be sure, take the car for a test drive.

How much does a Toyota Land cruiser weigh?

Earlier generations of the Toyota Landcruiser weigh 3000-3500 pounds, while later generations from 1984 to date weigh anything between 3500 and 5500 pounds.

What is the maximum towing capacity for the Toyota Land cruiser?

How to shop for a Toyota Land Cruiser online

After you decide on your dream Land Cruiser’s YOM, key in the YOM on online listings, which will help you filter out Land Cruisers from other years. You can filter the engine displacement, colour, mileage, and other specifications

Why is the Toyota Land cruiser expensive?

Land Cruisers are some of the most reliable and durable SUVs ever made and stand out among SUVs from other manufacturers in terms of Luxury, efficiency, and performance.

How many miles will a Toyota Land Cruiser last?

A Toyota Land Cruiser will last for around 300,000 to 400,000 miles before you start replacing major mechanical components, which is 100,000 miles more than most JDM SUVs.

Which are the Toyota Land Cruiser’s main competitors?

The Toyota Land Cruiser might be the best JDM SUV but being the best means that there’s always competition. The main competition for the Land Cruiser includes the Mitsubishi Pajero, Land Rover Defender, and the Nissan Patrol, among other SUVs.

How to Import a Toyota Land Cruiser

Can you make this guide better? Are you a huge fan of the Cruiser? If so, please contact us.