With so many iconic cars to come from Toyota in the ’90s, it would be a sin if we didn’t mention the Aristo. It was the automaker’s response to the luxury four-door sedan market, and in recent years it has become a favourite amongst the VIP tuning community. Although being produced for only 14 years, it left a lasting impression on everyone. Who doesn’t want a luxurious sedan that can be had with the iconic 2JZ engine straight from the factory? With the Aristo, you get both room and performance.

Sadly, Toyota never offered the Aristo in North America, but we got the next best thing, the Lexus GS. Under all the Lexus badges, the GS was a Toyota Aristo through and through. However, purists still prefer the Aristo over the GS. Even though Toyota stopped selling the Aristo in 2005, die-hard fans can still purchase a new Lexus GS to this day.

In its 14-year life span, this Luxo-barge went on to have two generations and basically cemented itself in the VIP scene here. In this buyer’s guide, we are going to go into more detail about this iconic and underestimated four-door sedan and why you should consider buying one.

Ask any car enthusiast on the planet and they will tell you that no car is perfect, unless it’s their car. Joking aside, every single model comes with its fair share of common issues, regarding how much testing the manufacturer did before releasing it to the public. It may be something as simple as random squeaks and cracks coming from the interior, or something major as a catastrophic design flaw that causes the engine to fail prematurely. With the Aristo getting up there in age, we have compiled a list of the common issues to look out for when buying your first Aristo.

If you are looking for the top-of-the-line twin-turbo 2JZ engine, one of the most important things to look for is a whine coming from the engine starting at 4000 RPM. This is indicative of the secondary turbo failing. This is not a super common issue, but it can be a costly one.

Another problem to check for is that all the electronics are properly working. Since it was a luxury car, the Aristo was loaded with many electronics that over the years have failed. It is not necessarily Toyota’s fault, electronics only last so long, and trying to trace one of these issues can be very frustrating and expensive if you are not handy with a voltmeter.

Nowadays automatic transmissions have become the norm, and, in many cases, they can outperform manual transmissions. That was not the case back then. When test driving your soon-to-be Aristo, make sure to go through all the gears and listen for any abnormal hesitation or knocks.

Lastly, the throttle body sensor needs to be cleaned on a regular basis and eventually replaced. The best way to check for this is to put the pedal to the floor and check for any warning lights that might pop up such as the VSC light, or the check engine light.

The Aristo has been steadily gaining popularity, therefore the price has gone up accordingly and can vary quite drastically. Some models can be had for as little as $4,600 while the top examples can reach upwards of $18,000. We have gathered a few of the cheapest and most expensive Aristo’s currently for sale at JDMbuysell.com 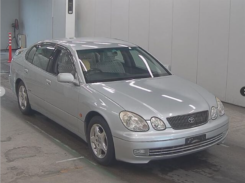 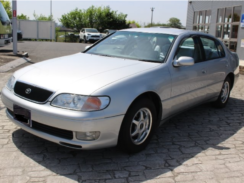 There are a lot of choices when It comes to luxury sedans. All the major automotive Japanese manufacturers have produced at least one of these luxury, four-door cars. Here is a list of models that are similar to the Aristo:

The Aristo was around got only 14 short years (1991-2005), but its twin brother, the Lexus GS is still in production today. The only reason the Aristo was never offered in North America was that Toyota wanted to push its luxury brand, which was Lexus of course. In this section, we are going to have a look at the different generations that Toyota produced over the Aristo’s lifespan.

Many people believe the reason the Aristo was so well received was thanks to the help of an Italian design firm called Italdesign Giugiaro. They were responsible for the elegant, sweeping lines and low drag coefficient that mimicked the European cars of the time.

First released in October 1991, the Aristo was built in a state-of-the-art facility where most of the work was done by automated robots. For example, 4,200 body welds were done by a robot, while only eight were left up to humans. This meant that the chances of getting something wrong were greatly reduced.

The first generation was offered with three engine variations and two automatic transmissions to choose from. There were two straight-six 2JZ engines (one turbo and one N/A) and a third 4.0L V8 was added later in 1992, which came with AWD as standard.

Yes, the Aristo has the same 2JZ-GTE engine as the MK4 Supra!

The interior was also loaded with available luxury options such as walnut trim, leather and electronically tilt and telescopic steering wheel, moonroof, and an automatic 12-CD changer. As standard, the Aristo came with standard driver and passenger airbags.

The second-generation Aristo was unveiled in August 1997. It featured the same three engines from the previous generation, but also added a fourth 4.3L V8 to its roster. In addition, there now was a total of three automatic transmissions available to choose from.

The new platform featured a front-engine, RWD configuration that was also found on the Toyota Crown in Japan. The exterior now utilized quad headlights similar to those found on the Lexus SC Coupe. The interior received new electroluminescent “Option” gauges and an upgraded sound system.

When the second-generation Aristo was introduced in 1997, Toyota/Lexus claimed that it was the faster production sedan at the time, even beating out the BMW M5!

A facelift was introduced for the 2001 model year. This included a slightly revised grille, tinted headlights, and Xenon lights that became standard equipment on the V8 cars but remained an option on the inline six-cylinder cars.

Are spare parts hard to come by?

Not at all. Since the Aristo was nearly identical to the Lexus GS sold in North America, spare parts are very easy to get.

Is an RHD vehicle hard to get used to?

No. Within a week you will feel light at home in the driver’s seat.

Is the Aristo a good daily driver?

Absolutely! It was the epidemy of Japanese luxury back in the day, plus it had four doors.

Where did the name “Aristo” come from?

The name “Aristo” comes from the Greek word, which roughly translates to “best”.

Is the Toyota Aristo reliable?

Yes. Like most other Toyotas, they were designed to last a long time. That’s why these cars have such a good resale value.

What will the maximum boost factory turbochargers handle on a Toyota Aristo engine?

The turbos on 2JZ-GTE make around 11 psi stock but can handle no more than 17.5 psi, mainly because of the ceramic turbine blades. Still, if you get one with steel turbine blades, it can manage a maximum of 20.5 psi.

How to change the engine oil on a Toyota Aristo

On the driver’s side of the engine bay, locate the oil filler cap and open it. Then go underneath your car and open the oil drain plug under the oil pan, which will drain the old engine oil. Replace the oil drain plug, but do not close it tightly if you need to clean the engine using a flushing agent. After flushing the engine, you can add in new oil while the engine is running to ensure you fill in enough oil.

How to Import a Toyota Aristo

Can you make this guide better? Are you a huge fan of the Aristo? If so, please contact us.