The Mazda RX-7 was unlike any other sports car of its era due to its unique rotary Wankel engine. The rotary engine doesn’t have conventional pistons, but rather has one large reciprocating piston that resembles a triangle. The result is a compact, simple, and light motor that has a higher power-to-weight ratio when compared to a normal internal combustion engine. This also means that the Wankel rotary engine can rev at much higher rpm.

Mazda built the RX-7 for nearly 25 years from 1978 to 2002 and spanned across three generations. All RX-7s were built to be front mid-engine RWD sports cars with two seats, although there were a few 2+2 configurations.

Thanks to its unique look, engine and exposure in movies, video games, and magazines, the RX-7 has reached legendary status amongst the JDM community. As these cars are very sought after, prices are steadily climbing and finding a good, unmolested example is becoming increasingly difficult.

We have created this in-depth buyers guide for those in the market for a new RX-7 or for someone who simply just wants to know more about this unique Japanese sports car. We condensed numerous hours of information into one intuitive and helpful buyer’s guide to help you better understand and know what to look for when buying your dream car.

Low oil level. Unlike traditional engines, the rotary uses oil. They have a dedicated pump that squirts oil in the motor to keep the apex seals lubricated. A new and uneducated owner could very easily overlook this important fact and not check their oil regularly, which is the fastest way to wreck your engine.

Flooding. The Mazda RX-7s can be finicky cars, especially in cold weather. When they are started in colder temperatures, they will run extremely rich and it’s recommended that you let them slowly warm up. If you turn off the car before it has reached the temperature you risk the chance of flooding the engine. If that happens, there is a certain sequence that needs to be followed in order to get all the unburned gas out.

Engines need rebuilding often. This one is controversial. Most RX-7 engines that need rebuilding will be because they have been neglected by their owners. It takes a special breed to own an RX-7 because it’s not like having a normal combustion engine car. It requires special attention and most owners did not do their research beforehand.

Poorly designed cooling system. The third-generation RX-7 came from the factory with an underperforming cooling system, even on a stock setup. So, if you’re planning to mod your car, be sure to pay some attention to your car’s cooling system as well. If not, you’ll be on the fast track to an engine rebuild.

Brittle vacuum hoses. The turbocharged RX-7s are notorious for having vacuum leaks due to the over 67 boost and vacuum hoses it came with. As these cars age, those hoses are almost guaranteed to develop cracks and loose pressure. We recommend that you go ahead and do some preventative maintenance by replacing all of them with synthetic rubber hoses.

Rust in the spare wheel well. Although the Mazda RX-7 is not known for rust, it is a good idea to check the spare wheel well for rust or water damage. This will also give you a better idea of how well the car was taken care of by its previous owner.

Given its rarity, the Mazda RX-7 is not a cheap car to buy or maintain. That being said, you can still find examples out there starting at around $8,000, but pristine third-generation FDs can go as high as $45,000. Let’s have a look at what the cheapest and most expensive RX-7s look like. 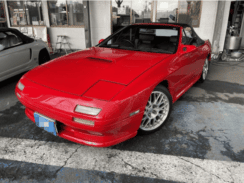 There is no direct replacement for a rotary engine car unless you want a Mazda RX-8, but there are plenty of cars out there similar in layout and performance. This section will give you an idea of similar cars that would make a perfect alternative for the RX-7.

As we talked about it in the intro, the mighty RX-7 was produced for nearly 25 years and was offered over three variations. We are going to take a closer at each generation and the defining factors that each had.

The first-generation RX-7 was introduced in March of 1978 with the intention of replacing the outdated Savana RX-7. It was designed to be a fun, economical sports car and was one of only two Wankel-powered cars in Mazda’s arsenal. Since the rotary engines produced fairly high horsepower from a relatively small displacement motor, the RX-7 became very popular with the Japanese consumer due to the fact that Japan had very strict taxes for cars with motors over 1.5L.

RX-7s were offered with three engine choices. Two 1.1L, one of which was turbocharged, and one 1.3L naturally aspirated engine. Additionally, clients had the choice of four transmission options. They could choose between a four and a five-speed manual and a three and four-speed automatic.

As the FB went on, slight modifications were made to improve the handling, appearance, and even safety of the car. The 1981-1983 car got lighter and received four-wheel disc brakes alongside some interior improvements.

Mazda introduced the FC in 1985 with quite a few improvements, both mechanically and cosmetically. In the looks department, the RX-7 looked a lot more streamlined and aggressive. They even offered a convertible version of the RX-7. Additionally, Mazda ditched the outdated carbureted engines and introduced state-of-the-art fuel injection to their cars.

For this generation, the automaker kept it rather simple when it came to engine choices. All of them were the now-iconic 1.3L motors. There was a total of four variations of the 13B engine. Two were naturally aspirated, while the remaining two were the more powerful turbocharged versions. A five-speed manual and four-speed automatic transmission were the only two choices available.

In 1988 Mazda launched the 10th-anniversary edition RX-7. This consisted of an all-white exterior with colour-matching wheels, moulding, taillight housings, and mirrors. The GTU trim was sold between 1989-1990 and it was more geared towards performance. It started off as the basic car with no sunroof, A/C, and other goodies that would add weight. Mazda then added four-piston brakes, 16” wheels, special cloth seats, one-piece brakes, etc. to make it a track-ready car from the factory.

Believe it or not, the last generation RX-7 was in production for a total of 10 years. By this time, the RX-7 was a unique sports car that everyone wanted to get their hands on. The best part is that the FC came with the same 1.3L engine, but for this generation, it was twin-turbocharged and produced roughly 250 horsepower and 217 lb. ft. of torque.

The downside was that the price was considerably higher than other comparable models on the market, which turned many people away at the time. In fact, Mazda only managed to sell 1,152 examples of the FD RX-7 in all of Europe.

As the years progressed, changes were made to increase the reliability of the FD. Most of those changes were unseen and came in the form of mechanical and suspension upgrades. The body more or less stayed the same.

A high-end “RS” version of the RX-7 was unveiled. It came with slightly more power (276hp), standard 17” wheels and was overall lighter compared to a stock model. The “Type R” was even lighter than the “RS” and included a stunning red interior alongside different wheels. Lastly, the “Spirit-R” took all the best features from previous FDs and combined them to produce this car in a limited number of only 1,500.

When was the Mazda RX7 made?

Mazda Produced their flagship sports car, the Mazda RX-7, from 1978 to 2002. The RX-7 was produced in Japan for 3 generations and is famous mainly because of its rotor engine.

Early production models of the Mazda RX-7 are the cheapest as they start at around $19,000, which might increase or decrease depending on the car’s spec, mileage, and condition. The third-gen RX-7 (FD3S) is the most expensive as you’ll rarely find one being sold for under $30,000, and prices can go over $70,000.

Why is the Mazda RX-7 illegal in the US?

RX-7s are common in the United States, and if you walk into any JDM auto seller, you’ll not lack one that is put up for sale. Individual sellers also list their cars online, and you can also find other RX-7 listings online. View Our Mazda RX-7 Ads for sale.

When did Mazda Discontinue the RX-7?

Mazda announced the discontinuation of the RX-7 in 2002, although the car was still produced for several more years. The last RX-7 rolled off the assembly line in 2008. The decision to discontinue the vehicle was mainly due to declining sales. In 1992, Mazda sold nearly 40,000 RX-7s in the United States in its peak year. However, by 2002, that number had fallen to just over 2,500. In addition, safety and emissions regulations were becoming increasingly strict, making it difficult for Mazda to continue producing the car without making significant changes.

Why is the Mazda RX-7 so expensive?

The Mazda RX-7 has gotten expensive due to several factors, including limited production and the car’s increasing rarity, making it a collector’s item. However, for collectors and fans of the RX-7, the high price is well worth it for the chance to own a piece of automotive history.

How many Mazda RX7s were made?

Where was the Mazda RX-7 produced?

The Mazda RX-7 was produced in Mazda’s Hiroshima facility in Hofu, Yamaguchi, Japan. All generations were made in Japan, and no units were produced outside Japan.

How much is monthly and Annual insurance for a Mazda RX-7?

Most insurance agencies will ask for around $900 annually to cover your RX-7, but this is not usually a fixed price. Some factors contributing to an increase or decrease in insurance payments are the owner’s home location and the car’s worth, especially if it’s a rare spec.

Most Mazda RX-7 owners treasure their cars, so buying one shouldn’t be difficult. Once you verify the necessary paperwork, check for rust and paint condition, and test drive the vehicle to assess the engine, suspension, and drivetrain condition.

How to Import a Mazda RX-7

Can you make this guide better? Are you a huge fan of the RX-7? If so, please contact us.