The Honda NSX (New Sports X – as in solve for the unknown variable X) can trace its roots back to the 1980’s Italian studios who were tasked with designing a sports concept car.

The concept car, dubbed the Honda Pininfarina Experimental (HP-X), never made it to the assembly line. Instead, it formed the basis by which the NSX was built. In addition to packing a 3.0L VTEC V6 engine (a formidable competitor to the V8-engined Ferrari), the NSX offers the Honda reliability and a lower price-point for a supercar. The V8 engine is positioned at the rear – something that leaves most (new) enthusiasts in search for it at the wrong end of the vehicle.

Today, the Honda NSX is sold in the North American market as the Acura NSX. The name has been changed to mean something else now—the New Sports Experience. There are two distinct generations of the NSX – the first generation (1990-2005) and the second generation. The second generation was first rolled out in 2016 with production going on to date.

The Honda / Acura NSX is the original Japanese super-car.

Honda makes awesome vehicles by design. However, no car drives out of the factory completely flawless if it intends to survive the road. The same applies to the NSX. First off, there are clutch issues unique to this model. The clutch plates have a smaller surface area than that of other cars in their class. When trying out a potential addition to your portfolio, be sure to listen for irregular engine racing, especially when climbing a hill.

Secondly, older models have notorious ABS (anti-lock brake system) failures. The best way to tell if the ABS needs to be replaced is if you can hear a washing machine-like noise coming from the front wheels while driving.

Another issue plaguing the 1991-92 models is the AC component which has (an almost amazing) propensity to break down. Once this happens, the whole system has to be replaced. Moreover, the window regulators for older models go wonky after a fair bit of use. This is true of older Hondas – and unfortunately, once the issue strikes, the windows roll up and down very slowly.

Finally, we have the aluminum body. A few scratches are fine, but a sizeable dent would significantly affect the car’s value. Shops that do good aluminum body repairs can be hard to find. When shopping for a car, be sure to scrutinize the Carfax report.

The Honda NSX production spans 30 years, meaning there is a wide price range depending on the year of manufacture, mileage, and record of maintenance.

Accident history plays a big role in the 2nd hand value of the NSX as its all-aluminum chassis can be difficult, if not impossible, to restore to factory condition after a significant hit. 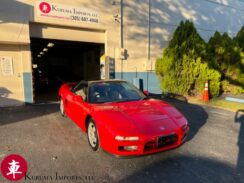 Alternatives to the NSX include the following,

In 1984, some Honda engineers are said to have cut a Honda City in half, then placed the engine behind the driver’s seat. The engine powered the rear wheels. This must have made the handling feel like that of a sports car because the engineers were impressed with the results of the experiment. They drummed up support for building a supercar from the Honda leadership at the time.

The Honda Motor Company joined hands with the Pininfarina studios to design a concept supercar that could compete with Ferraris. Pininfarina came up with a two-seater car with no roof and no windows – you could only enter it by jumping inside.

In 1989, Honda debuted its first NSX at the Chicago and Tokyo Motor Shows and it was welcomed with rave reviews. In 1990, it was sold in Verno dealerships in Japan. Sales also commenced in North America, with the car being marketed under the luxury Acura name.

It competed favourably with the Ford GT40 and wowed enthusiasts with its high revving levels (red at 8,300 rpm), the superb suspension and the titanium alloy connecting rods.

Perhaps as a testament to Honda’s dedication to quality, the car was assembled by a highly-specialized team of handpicked staff. Each of the 200 staff had at least ten years of experience assembling vehicles.

The Honda NSX Type R was designed solely as a track car. Caution and comforts were thrown to the wind, sacrificed for raw power, and unparalleled performance at the race track. The NSX coupe was stripped of its audio systems, air conditioning system, spare wheel and some electrical components, in an aggressive weight-reduction campaign. The next to go was the sound-deadening system and the forged alloy wheels, which were replaced with the lighter aluminum. Finally, the leather seats were replaced with lightweight carbon-Kevlar from Recaro.

The NSX Type T (or simply NSX-T) was introduced in Japan in 1995. It could be purchased via special order. Type T sported a black removable Targa-top. This model was engineered for comfort, sacrificing some weight in the process. Since the hard-top had been removed, and its structural support, Honda strengthened the rest of the body.

Along with the open cockpit, car occupants were treated to softer rides since the suspension was configured to provide ample cushioning. The 5-speed transmission gear ratio was also lowered by 4.2% to improve how the car was handled and its drivability.

In 1997, Honda undertook a thorough feature upgrade of the NSX line. One of the most significant changes was the upgrade of the engine into a 3.2-litre variant. In addition, Honda introduced the NSX-S, designed for excellent handling on winding roads.

The NSX-S was based on the Type R but could come with some premium add-ons. The weight reduction was as aggressive as that of its racetrack predecessor. The wheels, suspension and single rear windowpane saved on the weight – and the car was lighter than the other variants by an average of 49kg. This trim was the most expensive of all NSX models at the time, with the MRSP at $85,000.

For customers who wanted their Type S solely for the track, the NSX-S-Zero was introduced. This was an upgraded NSX-R, with no bells and whistles – staying as lightweight as possible.

In 2002, the NSX received a facelift to make it look more modern. The pop-up lights were replaced with HID xenon headlights. At the back, the rear wheels were made wider to compensate for the revised suspensions. The changes made the car appear to sit lower on the ground.

After the facelift, drag reduced significantly. This led to faster acceleration and higher top speeds. The North American markets could no longer access hardtop coupes, but these could be ordered from Japan.

After a 10-year manufacturing hiatus, the Honda NSX production resumed in 2015. It featured a revamped, hybrid V6 3.5-litre engine hooked up to a 3-electric motorsport engine. It also has a dual-clutch transmission which goes up to 9th gear.

How much is a Honda NSX?

How many Honda NSX were made?

One of the reasons the NSX is so expensive is that very few units were produced. Honda and Acura sold 18,685 units, including special edition and homologation models, from 1990 to 2005.

What is the difference between Honda NSX and Acura NSX

There’s no difference between the Honda NSX and Acura NSX. Acura is Honda’s luxury and performance unit, which sold the NSX in the North American market, badged as the Acura NSX.

Why is there a Honda NSX and Acura NSX?

Acura was established in 1986 as Honda’s luxury and performance unit, and its first manufacturing was based in North America. The Acura Legend and Integra were the first two cars to be produced by Acura. Then in 1990, Acura began producing and selling the NSX while Honda was doing the same in Japan.

When was the Honda NSX made?

Production of the first-gen NSX, NA1, and NA2, began in 1990 for North American and Japanese markets. In 2005, it was temporarily discontinued. The second-gen NSX debuted in 2007, unveiled in 2011, and early production models started rolling out in 2015, with sales beginning in 2016. However, the second-gen NSX was only manufactured by Acura between 2016 and 2022, thus the name Acura NSX.

What does NSX stand for in Honda?

NSX is an abbreviation for “New Sports eXperience,” derived from the Honda HPX concept car. The Honda HPX “Honda Pininfarina experimental” is the concept car that Honda designers and engineers built the NSX from testing out engines, drivetrains, and designs.

Where can I buy a Honda NSX?

You can buy your dream NSX from a variety of dealers. Finding one online from the comfort of your seat is easier. Still, you should check from an accredited lister to avoid getting scammed or buying a car with many issues. View our Honda NSX Ads for sale

Why does the Acura NSX have Honda Logos?

Acura is Honda’s luxury and performance lineup meaning that it’s the same company but under different names making the same cars, such as the Honda NSX. You might find Honda badging and logos on an Acura-produced NSX, or some owner along the way replaced a lost Acura badge and replaced it with a Honda one.

How much horsepower does a Honda NSX have?

What engine does a Honda NSX have?

How to Import a Honda / Acura NSX