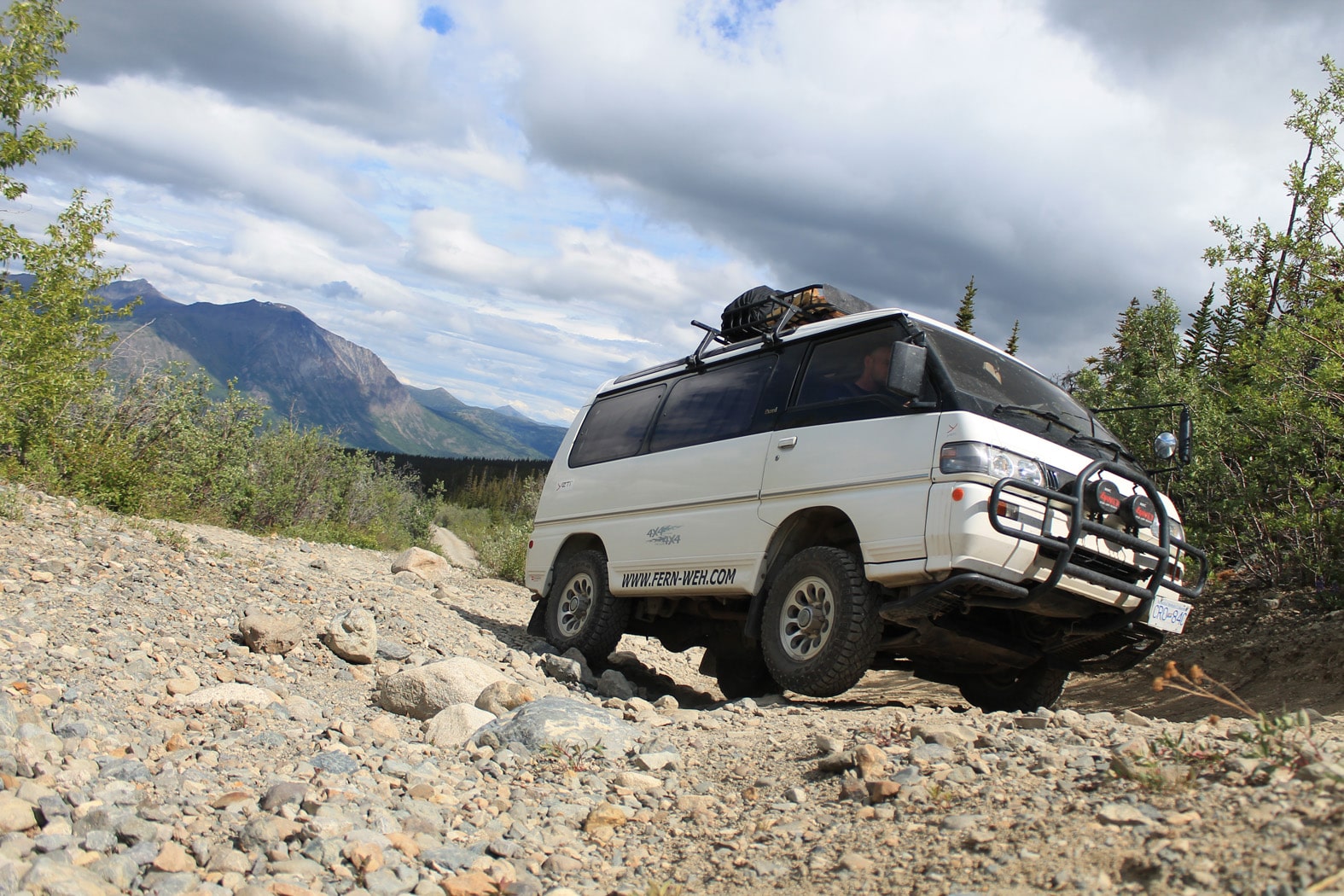 Ever since 1968, the Delica has been Mitsubishi’s answer to the van and pickup truck. Its huge success has seen models being exported all over the world. The name Delica came from the English phrase “Delivery car”. In other markets however, the Delica was offered under different names. For example, in Europe, Jamaica, and New Zeeland it was known as the “L300” (later renamed the L400), while in Australia they called it the “Express” and “Starwagon”. They kept it simple for the American market and named it the “Mitsubishi Van”. This utilitarian vehicle did come in a passenger var version as well, and that was known as the “Delica Space Gear”, which later became just “Space Gear” in Europe.

Currently, the Delica is one of Mitsubishi’s longest running production vehicle spanning over half a century, and it is still in production to this very day. Since 1968, the Delica has been produced over five generations, each one being slightly better than the over. While it has received numerous upgrades over the years, it is still a utility vehicle at its core, which people have become accustomed to. Drastically smaller than its American counterparts, the Delica was initially created for the tight streets of Japan. The European market also loved it due to its small size and reliability.

The Delica is the ultimate 4X4 van:

We have created this in-depth buying guide for you to give you as much information as possible before you go ahead and pull the trigger on this small practical little van.

Although Japanese cars are well-known for their durability, they are not exempt to issues. Such is the case with the early versions of the Delica. Early model Delica’s (L300) were known to have their front brakes fail at high speeds. This wasn’t due to mechanical failure, but rather because the brake pads would overheat and become virtually useless.

Another issue that plagued the L300’s was their slow, and trouble-prone 2.5L diesel engines. We all know diesels to be more robust and reliable than their gasoline counterparts. This unfortunately was not the case with the Delica’s 4D56 four-cylinder turbodiesel as it caused exhaust gas temperatures to rise to a level where it started cracking head gaskets. To make matters worse, the 4D56 is an interference engine, which means that if the timing belt snaps, the pistons and valves would meet in the most unfavorable of circumstances, thus destroying the engine.

Other issues that were reported, but not that common, were turbo failure and balance shaft belt failure. Most small diesel engines have a balance shaft to take away some of the vibrations from the unbalanced engine. If the belt that drives this balance shaft lets go, it can also cause significant damage to other parts of the engine.

Now we are not trying to scare you off from buying your dream minivan, we are simply informing you of the common issues that are associated with these models so that when it comes time to purchase one, you know what to look for.

Due to the fact that Mitsubishi has been producing the Delica for over 50 years, prices can vary quite a bit. Of course, options, current state, and mileage play a very important role in the price. It seems like the 90’s Delica’s have developed a cult following here in North America, and some can be bought starting at just over $5,000, while a prime example can set you back as much as $25,000.

Thanks to the popularity of these Japanese minivans, other auto manufacturers have jumped at the opportunity to try and get a piece of the action. Below, we have compiled a list of other models like the Delica.

The first generation Delica rolled off Mitsubishi’s assembly line in mid-1968 as a cab-over pickup and was given the chassis code T100. It came equipped with either a 1.1L or 1.4L gasoline engine with a top speed of 115km/h (71mph) and a total payload of 600kg (1,323lbs.). Given the size of the first Delica, those numbers were impressive. Luckily, a year later the famed automaker introduced a cargo and passenger van version due to increased demand for those body styles. Sadly, the passenger van was discontinued in 1974, after just seven years.

In 1971 the Delica received its first facelift. This included a smaller, more appealing grille and a new 1.4L engine that produced 86hp. The 1.1L engine was still available at that time, but shortly after it was phased out of production.

1974 saw the Delica receive yet another facelift. This time the front-end was dressed up with a lot of plastic cladding and the addition of double headlights. Moreover, the name got changed to “Delica 1400” being as that was the only engine available at that time. Lastly, a longer wheelbase one-ton truck was added in 1976 and it went by the chassis code T121.

With the arrival of the second generation, the Delica saw major upgrades, both inside and out. Engine wise, there were a total of nine engine choices. Four of those engines were gasoline and ranged from 1.4L to a 2.0L. The remaining five were diesel versions which started from 2.2L 16-vavle turbodiesel and went all the way up to a 2.5L 8-valve turbodiesel. All engines were offered in a inline four-cylinder configuration only.

Width was also increased to measure a total of 1,690mm (67”), thanks to stricter regulations put in place by the Japanese government. The suspension wasn’t forgotten either. A new independent wishbone suspension was introduced in the front, while the rear got leaf springs. Also available was a sliding side door alongside a one-piece gas strut that help up the rear hatch.

1982 was the first year that available four-wheel drive was available on the Delica. Mitsubishi took the 4WD system from the Pajero and adapted it to the Delica. People went crazy for this new feature, and for good reasons too. It was a small, economical van that could now go essentially anywhere.

In Australia, Chrysler introduced the Delica under the name “Chrysler L300 Express” at the Adelaide motor show. The Philippines also go the van and named it the “Mitsubishi L300 Versa Van”. It was available there until the beginning of 2012. In Indonesia, the Delica went by “Colt 300” and was only available with the 2.5L turbodiesel. A gasoline engine was offered for a short period of time, but due to poor demand it was quickly taken off the market.

In June of 1986, the all-new Delica was unveiled to the world. The aerodynamic, rounded edges became affectionately known as the “soft cube” by Mitsubishi. Its increased safety and monocoque body also became very popular with the RV segment in Japan.

In 1990, Australia received a naturally aspirated diesel as an option and the “Delica Star Wagon” was simplified to just “Starwagon”. Additionally, two wheelbases were now available to choose from, and the commercial version was now known as simply as “Express”.

As far as performance goes, Mitsubishi introduced a large range of both gasoline and diesel engines to choose from, adding up to a total of 11 engines. Out of those 11 engines, five were gasoline powered and the rest diesel. They ranged from a 1.4L gas engine all the way up to a 3.2L diesel specially made for the Chinese market. Combine that with the available two-wheel or four-wheel drive and the various body styles to choose from and the possibilities were almost endless.

In China, the Delica was licensed by Hyundai under the name “Hyundai Grace” or “Hyundai H-100”. In 1986, a version named “New Grace” was introduced and it was offered with a 2.4L gas or 2.5L turbodiesel inline-four. Both engines were from Mitsubishi.

Mitsubishi’s fourth generation Delica received the most extreme and aerodynamic styling upgrade to that point. Unfortunately, no truck models were available for this generation, but they made up for it by introducing bigger gas and diesel engines as well as a more capable 4×4 system that Mitsubishi shared with the Pajero.

Offroading with the L400 Delica:

The passenger models were known as the “Delica Space Gear” in Japan and were available with six trim levels in both short and long-wheeled versions. Export markets saw the Delica nameplate completely disappear and replaced with the “L400” badge while passenger vans were simply known as “Mitsubishi Space Gear”.

The Mitsubishi Delica is a popular off-grid / camping vehicle:

Australia still received the cargo and passenger versions with four available trim levels, while South Korea took the Delica and rebadged it as the Hyundai Starex. It was produced for a total of 10 years between 1997-2007.

In late October 2006 Mitsubishi revealed that there will be a new version of the beloved Delica coming out. They named it the “Delica D-5” and it was unveiled at the 39th Tokyo Motor Show. The monobox minivan was an eight-seater, four-wheel drive vehicle featuring a continuously variable transmission coupled with a 2.4L inline-four engine. It was put on sale on the last day of January 2007.

2013 saw the introduction of a 2.2L turbodiesel that produced a total of 177hp and 280ft. lbs. of torque. Mitsubishi claimed that this engine produced smooth acceleration all the way though the rev range and it achieved a low compression ration of only 14.9:1. The fuel mileage was an estimated 13.6km/L. Indonesia also got a taste of the D-5 Delica between 2014-2019.

A radically different facelift version was introduced in 2019 under the design language known as “Dynamic Shield”, and it was most definitely dynamic. The inside now featured a 10.1” infotainment system alongside e-Assist. This version was first unveiled at the 2019 Tokyo Auto Salon.

Are spare parts for the Delica easily available in the US?

Due to the fact that Mitsubishi interchanged many parts between models, most parts should be easily available at any auto parts store.

Do Delica’s only come from Japan?

No. Most of them were produced and sold in Japan, but some owners have imported them from Europe or even Australia.

Can mechanics in North America work on the Delica?

Of course. Any certified mechanic can work on these vehicles. They are not much different than the cars we have.

Is it hard to get used to driving a right-hand drive car?

No. Within a few hours you’ll feel right at home. However, extra special care needs to be taken when turning left.

Can you get a left-hand drive Delica?

Although left-hand drive Delica’s were available, they are incredibly hard to come by and fetch a much higher price due to its rarity.

Are aftermarket parts available for the Mitsubishi Delica?

Absolutely! The Delica was offered in many different configurations, and thanks to the fact that they have a cult following, many companies have created numerous aftermarket pats for them.

How to Import a Mitsubishi Delica

Robert's been into cars ever since he was little. His experience with vehicles comes from his passion and ownership several cars including many JDM vehicles

What do you think? Cancel reply