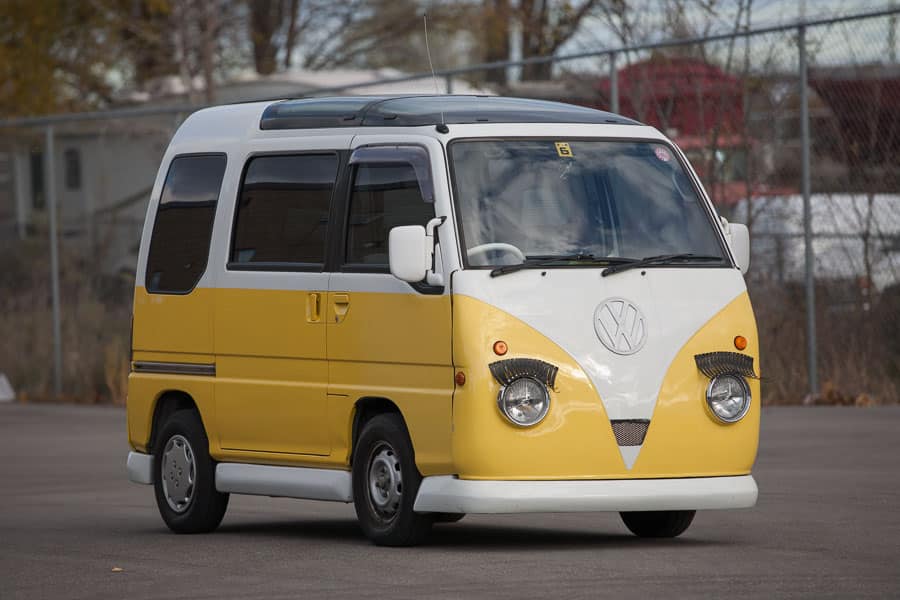 Does size really matter?  Yes it does!  The proof is the Subaru Sambar. Smaller really IS better with this petite “kei car” vehicle.  Available in two versions, a van and a pick-up truck, this little Subaru that could – and does – provides ample space for most needs.

While generally regarded as reliable by owners, there are two commonly cited issues with the Sambar. The first pertains to the CVT transmission on certain models from 1990-1995. They suffered from a number of problems and the general consensus is to avoid them altogether as parts and finding someone capable of servicing them is quite difficult.

The second issue relates to the “Clover-4” engine used from 1990-2012. They were prone to oil leaks around the gaskets and seals. This is not necessarily a major concern in terms of leaks, but it should be noted.

Like most Kei trucks, Sambars can be found from a few thousand and go all the way up to over $10,000 dollars depending on the year, condition, and options. Below are some examples listed for sale by dealers on JDMbuysell.com

There are several vehicles that come similarly equipped as the Sambar, some examples are:

If you choose the van layout, you will realize that despite its’ diminutive size, it can do just about anything that other minivans and SUV’s do, plus things that minivans can’t – like go off-road. If efficiency is what you seek, look no further as they are economical and can get up to 40mpg.

For those more interested in hauling their family around or camping, the Sambar is the ultimate family vehicle. With seating for five, full-time four-wheel drive, and a 660cc supercharged engine, what more could any family want?

The Sambar is equipped with either a five-speed manual transmission offering extra-low gearing, or an easy-to-drive automatic. For those who like to camp out, the optional crystal lite roof and drapery help when getting away from the hustle and bustle of the city.

The pick-up form Is ideal for any tradesman, such as construction workers who need to move small loads without hurting their wallet.  Its’ size helps it get to smaller areas where larger vehicles cannot.

In 1961, the first Sambar rolled off the production line. They were based off the Subaru 360 platform with an independent 4-wheel suspension and 356cc 2cyl motor that produced 18hp running. Power was put to the wheels via a 3-speed manual transmission. They were mainly marketed towards the business and commercial segments as a delivery vehicle.

The second generation saw a few minor changes along with a truck version being released. Most notable changes were: a slight increase in hp to 20, a raised roof for extra headroom, and a padded dash for safety. Also, the motor was accessible from outside, which made it easier to work on.

The third generation saw several improvements, most notably a bigger engine and optional 4wd starting in 1980. Early models had the same 356cc engine albeit now water-cooled. Starting in 1977, a 544cc 2cyl engine, which put out 28hp became standard. Other features included sliding doors and an optional sunroof in 1979.

The fourth generation received some suspension and brake upgrades. Bigger drums were standard along with optional front wheel disk brakes. The engine remained relatively unchanged and by the late 80’s full-time 4wd was available.

The fifth generation brought on a number of improvements over previous generations. Most notably was the introduction of the 658cc “Clover-4” engine which would be used all the way through 2012. Power was increased to 40hp on naturally aspirated models and a supercharged option was now available with fuel injection that put out a respectable 54hp. A 5-speed manual was standard and a CVT was available on some models. However, the CVT was dropped in 1995 due to reliability issues and replaced with a 3-speed automatic.

Most of the changes were cosmetic along with some safety features such as airbags and ABS brakes. There was a slight increase in horsepower to the naturally aspirated and supercharged models. Also, all N/A models were now equipped with fuel injection.

This would also be the last generation of the Subaru Sambar with the van was phased out in 2009, followed by the truck in 2012. While they still wore the Subaru nameplate, they were now made by Daihatsu.

Compliance in Canada for the vehicle is very easy.  Universal headlights fit most of the models, including the Volkswagen Camper conversion model.  While the stock van also fits universal headlights for safety and looks, it is recommended that E-Code headlights  be installed.  As with all vehicles, a day time running light (DRL) module, amber side markers in the front and red rear side markers are needed.

Which years of the Subaru Sambar are best?

The 1990+ models are the most desirable as parts are more readily available and they came with bigger engines.

Well, you probably won’t find a clutch kit at your local auto parts store as they were not imported to North America. With that said, there are importers that sell parts here, otherwise you will need to have them shipped from Japan.

Is the Subaru Sambar a reliable work vehicles?

Yes. It’s one of the reasons why they have grown in popularity. It’s no surprise Sambar’s and other Kei trucks have become popular on a farm, with sportsmen and hunters to haul gear around, and for light-duty construction.

Was the Subaru Sambar available in LHD?

Technically yes, some Sambars were imported to the US in the late 1960’s. However, newer models will be RHD as they were intended for the Japanese domestic market.

Is there a VW Subaru Sambar?

No, however many Sambar’s have received what is referred to as a “Kombi Conversion” whereby the vehicle receives aftermarket cosmetic modifications and VW badging. Example.

How to Import a Subaru Sambar

When I'm not helping clients with their automotive service needs I research and write about all things JDM.

What do you think? Cancel reply